Late on friday night I stumbled across an episode of Heston Blumenthals 'In search of perfection' on Youtube. In this particular episode Heston was trying to create the perfect Peking Duck, and one of the courses he was creating involved making a stock, a clarified one at that.

The traditional method (simplified) to clarify a stock would involve blending some meat in a food processor (if its a chicken stock you would blend chicken breast, for a beef stock... beef) along with some egg whites and add this mix to the cold stock.

The next stage would be to whisk the stock continuously with the egg-meat mix and slowly heat it all up on the stove. When it boils you would stop whisking, reduce the heat to a slow simmer for 45-60mins and keep an eye on it, too heavy a simmer will destroy your work to this point. As the mixture simmers, the egg white mixture will form a soft crust on top of the stock through which the impurities will rise and be filtered. (If there is no natural break in the crust through which the stock can bubble up, gently clear a hole with a ladle.)

Next, scald a clean tea towel or muslin in boiling water and wring out to remove the moisture. Line a colander or sieve with the tea towel and set it over a bowl. Slowly ladle the stock through the strainer being careful not to disturb the crust. Do not squeeze or press down on the contents of the strainer, or the stock will become cloudy; leave it to filter through the tea towel and strainer. Remove the strainer carefully and discard the contents. You may then degrease the stock in the bowl by pulling strips of paper towel across the surface. You would then admire your crystal clear consommé that you have created.

The difference between what Heston did and what I noted above, is that Heston uses a technique called 'Ice Filtration' or 'Gelatin Filtration' which appears to achieve the same result but with a number of differences. The process involves making a stock, straining it roughly and then freezing it. Once frozen you place it onto of a few pieces of muslin that you have lined a colander with, place it over a bowl, and put the whole lot in a fridge for a day or two until melted

The way this technique works is to exploit the gelatin in the stock. If you have ever made a jelly and tried to freeze it you will know it wont set properly. This is due to the ice crystals formed during freezing effectively tearing through the bond the gelatin has created. The same thing happens with the stock. The second part the gelatin plays is to then filter the stock.

Once complete one should end up with a crystal clear stock that is full of vibrant and undiluted flavour...

Tune in tomorrow and see the step by step process I followed to inorder to try and recreate this technique at home.  Below is the stock I made yesterday and the froze over night... will it indeed become crystal clear, or will be a complete failure!?!?!?!?!


Part 2 is available by clicking here 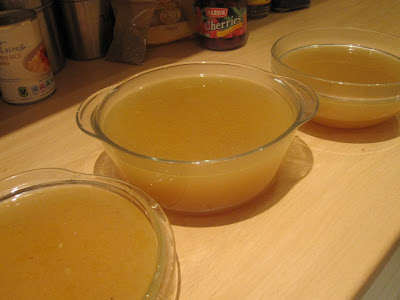 Simple brown chicken stock ready to go in the freezer
I would love to hear your thoughts on this method or the traditional one....

I look forward to reading your comments whether they are good, bad or indifferent!